We're a digital communications agency, crafting tools and campaigns for the retail, leisure and hospitality industries. Give us a tinkle +44 1202 375365 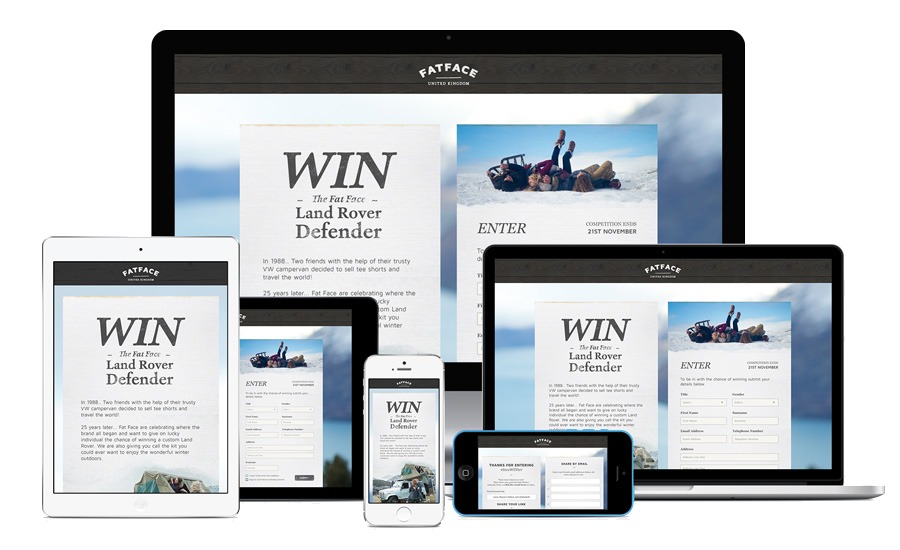 The lifestyle clothing brand Fat Face, wanted to run a competition that would generate more customer data for them. They also wanted the campaign to go viral on social networks.

We developed an idea that would encourage competition entrants to share again and again, thus giving us more and more data. We designed and built a microsite to run the competition, made it mobile friendly and connected it to some clever code that tracked entries, shares and voucher codes. We also used the hashtag #WinJim to track social involvement and ran Facebook ads alongside the campaign.

This competition ran over 10 weeks between June and September 2013 and was the most successful online campaign Fat Face had run to date in their 25 year history.

We had over 328,000 entries to the competition
At its most viral we were getting over 6,000 entries an hour
There were more than 40,000 shares across social media just via our microsite
And we gave away almost 100,000 voucher codes
Fat Face’s email database grew by almost 20% from this one campaign.

Like what you see? Get in touch with BBD Studioworks, Web Design from Poole